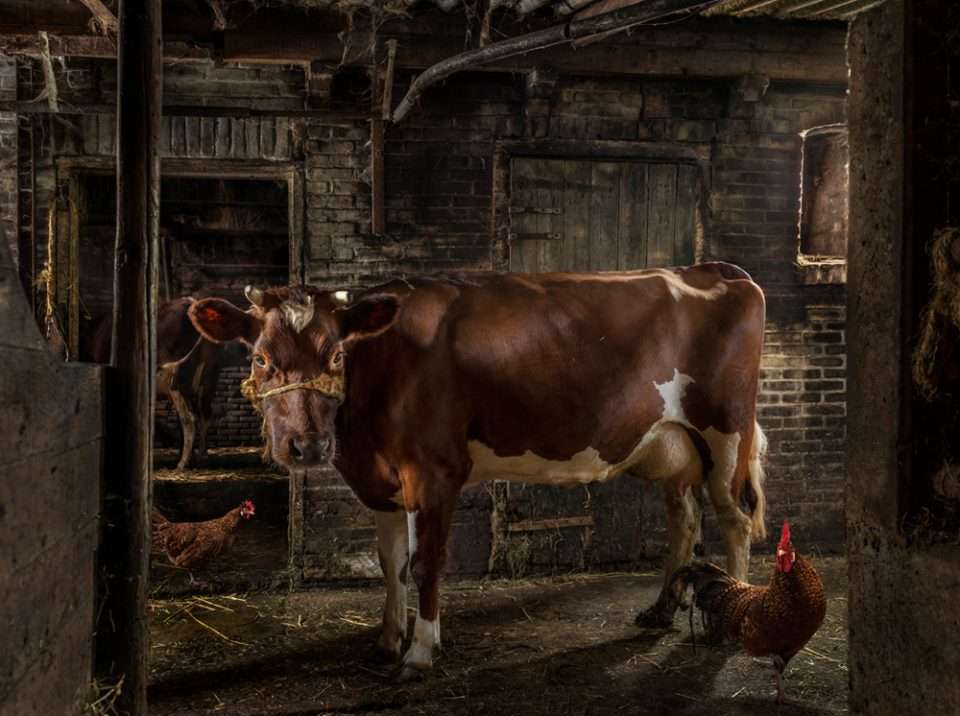 With her noble head, beautiful eyes and red-spotted body, Janke 278 is here, in an authentic group stable in Friesland. The Roodbont Frisian cow was a source of inspiration for this series. “When I came into contact with Janke, her owners, the Roodbont Fries Vee Foundation, the gentlemen of the Fryske Hinne Klub and the Rare Pet Breeds Foundation, the idea for this series arose.

Janke got me thinking: The theory of evolution and the associated natural selection does not apply to domesticated animals. I realized that man has been there for centuries succeeds in creating livestock breeds with targeted breeding that meet our needs and that pay off under the present conditions. But what grabbed me most is that it always becomes monotonous. The rate at which breeds disappear has greatly increased in the twentieth century. And it just seems to be getting faster. I want to stimulate that awareness – and the discussion about animal welfare – in a positive way through this series.

The current red fur Friesian cattle dates from the Middle Ages. It has long been a sought-after breed. But at the end of the nineteenth century, its popularity waned. The reason is the rise of the productive black pied Holstein-Frisian. At a certain point there are only two hundred and fifty cows of the Red & White Friesian breed. And only part of this is purebred: they descend from the bull ‘Vondeling I’ from 1914. This bull, abandoned because of the anti-red policy of the studbook, will become the symbol of the Red & White Friesian cattle breeding.

The Red & White Friesian cow is still threatened with extinction. Fortunately, more and more farmers and organizations are committed to preserving this cow with cultural-historical value. The free-range hen and rooster you see are quite an exceptional display. It concerns the Frisian chicken in the Red Cuckoo color variety. Around 1900 this color variety was as good as extinct. In the meantime, people are bravely trying to breed the Red Cuckoo back.