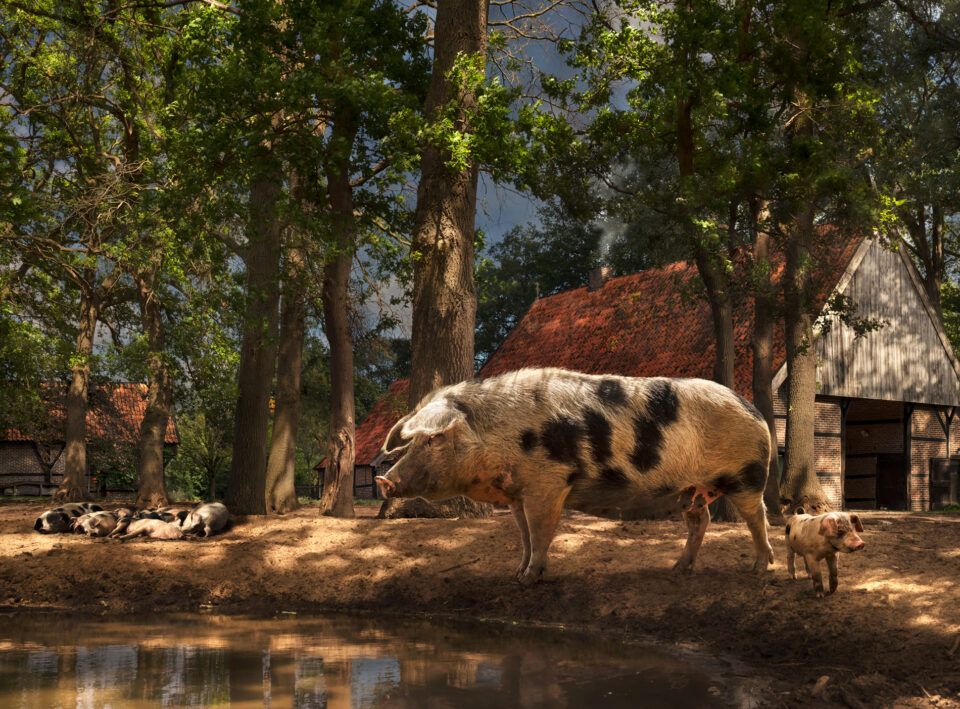 This is Olivia, a Bonte Bentheimer with a friendly character. She’s wandering around nicely the oak trees in the barnyard – as it used to be. You recognize the loose hoes farm Twente. Olivia and her ancestors are originally from this border region and owe their generic name to the German town nearby; Bad Bentheim.

Pigs have traditionally been found on Dutch farms. Wandering around they searched put together a meal themselves – often leftover food from humans – and were so easy to keep. In winter they guaranteed a nice portion of meat.

At the beginning of the nineteenth century there were two types of pigs left in the Netherlands: a small straight-eared pig and a large specimen with large lobe ears. By crossing From foreign breeds the old Dutch pig breeds as we know them now arose: the Bonte Bentheimer and the Dutch Land Pig. The Bonte Bentheimer is known for its fatty meat. Previously a pre, but since the years sixty is a defect in the eyes of the consumer. Leaner pork became popular, after which it deteriorated sharply with the Bonte Bentheimer. In the nineties the breed was even that good as extinct in the Netherlands.

After purchasing a number of foreign Bentheimers and the establishment of the Fokkersclub Dutch Country Pig in 2005, light once again appeared on the horizon. In 2009 there was even an association and associated studbook for the Bonte Bentheimer. But ironically, the increasing demand for fattier pork – because of the rich taste – probably still the best news for this breed.