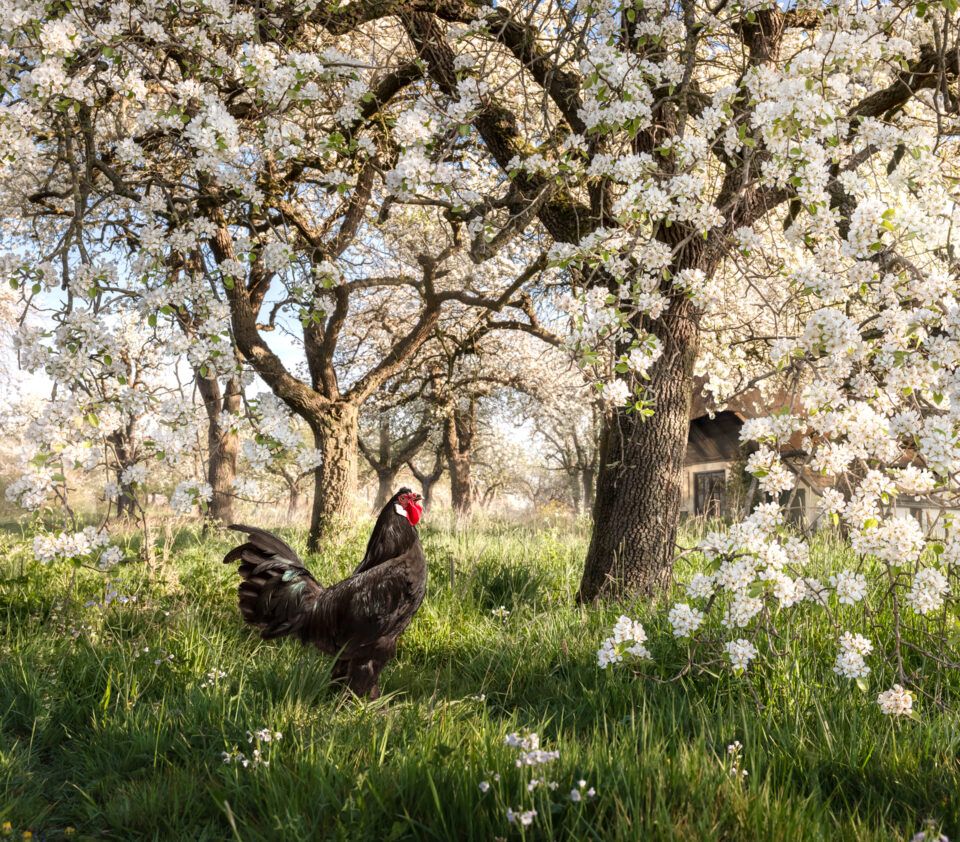 Karel, a gentleman fowl with feathered legs and a head reminiscent of a crow. Karel is therefore a Kraaikop (Dutch for crow’s head), a breed that used to be common in the provinces Gelderland and North Brabant. Without crest and comb, but with beautiful long vulture heels and erect posture it is a special appearance. A chicken that the nobility and wealthy bourgeoisie liked to show off. For example, it is believed that a Kraaikop can be seen on ‘De Hoenderhof’ by Jan Steen, a painting from 1650.

Despite good egg yields, the Kraaikop was especially popular for its meat. That was mainly to do with the large size of this fowl. ‘Giant among the old Dutch fowl breeds’ is also called the Kraaikop. While English speakers prefer to speak of ‘Breda fowl’, Germans about ‘Gelder Huhn’ or ‘Breda Huhn’ and French about ‘Poule de Breda’ or Poule Bec de Corneille. Just to indicate that this ‘Gelderse Brabo’ has also earned his spurs across the border.
The Kraaikop was the first chicken breed that has almost disappeared that the breeders of the Nederlandsche Hoenderclub (N.H.C.) started working after it was founded in 1900. Not for nothing there is a Kraaikop on the club’s emblem. The N.H.C. still makes a lot of effort to preserve the endangered breed – now exclusively kept by sport breeders – for the future.

“I wanted to present the Kraaikop in a blooming old fruit orchard, as people used to do at stately farms and country houses in Gelderland – especially the Betuwe – is known for it. I finally found this beautiful orchard near Wadenoijen. The blossom is only really beautiful for a short time, so timing was very important. I chose morning light, which meant getting up (very) early several mornings. But it was definitely worth it. The farm is a typical Betuwe T-farm.