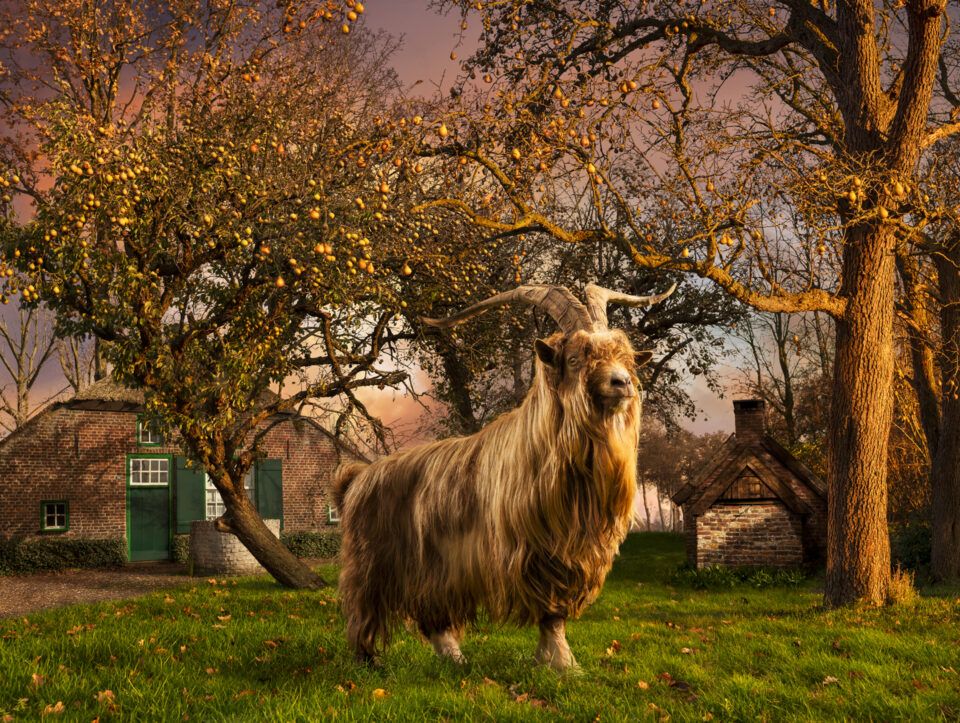 This is Pier, born on March 11, 2016 and now an impressive tough buck. Pier is a Dutch country goat, the only originally Dutch goat breed. The land goat is much to see on paintings from the period 1200-1900 n as a ‘buck’ on the aap-nut-mies-plank with which we learned to read.

The Dutch land goat used to be kept as a ‘poor man’s cow’ on small farms, for milk production and meat. For centuries this breed determined the appearance of the goat shed. The goats of the Dutch land goat are impressive. They have stout and often lyre-shaped horns, and regularly a upturned nose and goat wig can be seen. Who an adult goat, with his tousled hair, goatee and imposing horns, looking straight into his ‘devil’ slit eyes, needs little text and explanation about the meaning of ‘to have the goat wig on’. Bucks are long-haired, while the goats can also be short-haired and shaggy.

At the beginning of the twentieth century, the position of the land goat changed. For a higher milk production the breed was crossed with imported goat breeds. After the Second World War, the Dutch goat even almost out. In 1958 the last two copies, coming from the Goois Nature Reserve, donated to Blijdorp Zoo. The then director decided to breed with it, to bring four goats and four bucks to the National Institute for Nature Management in 1971 to be transferred. There are now a few breeding centers for the Dutch land goat and make conservationists like to take advantage of the austerity and hardiness of the breed.

“The Dutch land goat was found in large parts of the Netherlands. I portrayed Pier on a (composed) farm in North Brabant. Autumn has set in and the pear trees are already gone most leaves stripped. But their “golden” fruits are still hanging. It was quite a search for the right farm. My third visit to North Brabant was a charm. Can be recognized Farm Vagevuur in Aarle-Rixtel, a typical Brabant short gable farm.